Cryoablation or Drug Therapy for Initial Treatment of Atrial Fibrillation

Link to The EARLY-AF Trial article

The Early Aggressive Invasive Intervention for Atrial Fibrillation (EARLY-AF) trial was designed to compare the use of catheter cryoballoon ablation with antiarrhythmic drugs to prevent the recurrence of atrial tachyarrhythmia, as assessed by an implantable continuous rhythm monitor.

In both EARLY-AF and STOP AF First, patients were randomly assigned to undergo PVI with cryoballoon ablation or receive antiarrhythmic drug therapy (chosen based on local practice & up-titrated to maximum dose) for initial rhythm control.

In EARLY-AF, all patients underwent insertion of implantable cardiac monitor.

After the patient’s AF is rate/rhythm controlled

Dosing anti-arrhythmics between the two trials

Inclusion vs Exclusion criteria between the two trials

#CardsJC: Effect of Salt Substitution on Cardiovascular Events and Death – The SSaSS Trial 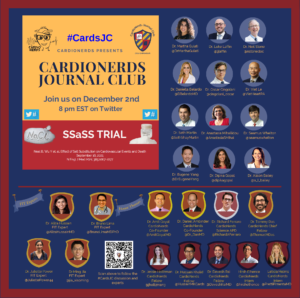